This tutorial explains how an iPhone or iPad owner can become a tester for the Craving Experiment. Please make sure to read the textual instructions on each slide carefully. Each step is supported with screenshots to give you a visual reference. It is recommended to open this page on a device other than your phone (e.g. tablet, computer, etc.) so that you can reproduce the steps easily on your phone. 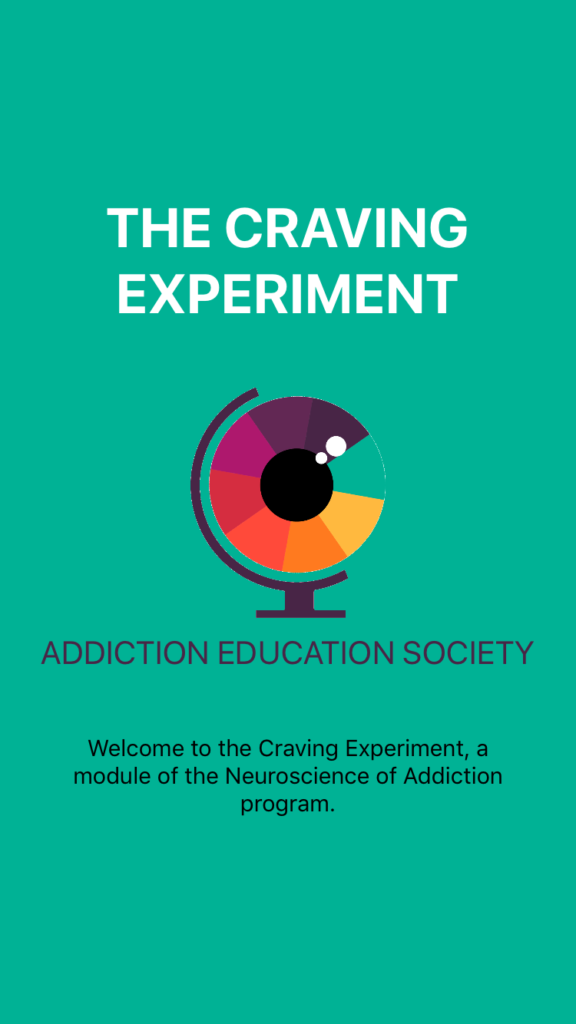 Launch your camera app and point the camera to the QR code on the right side. 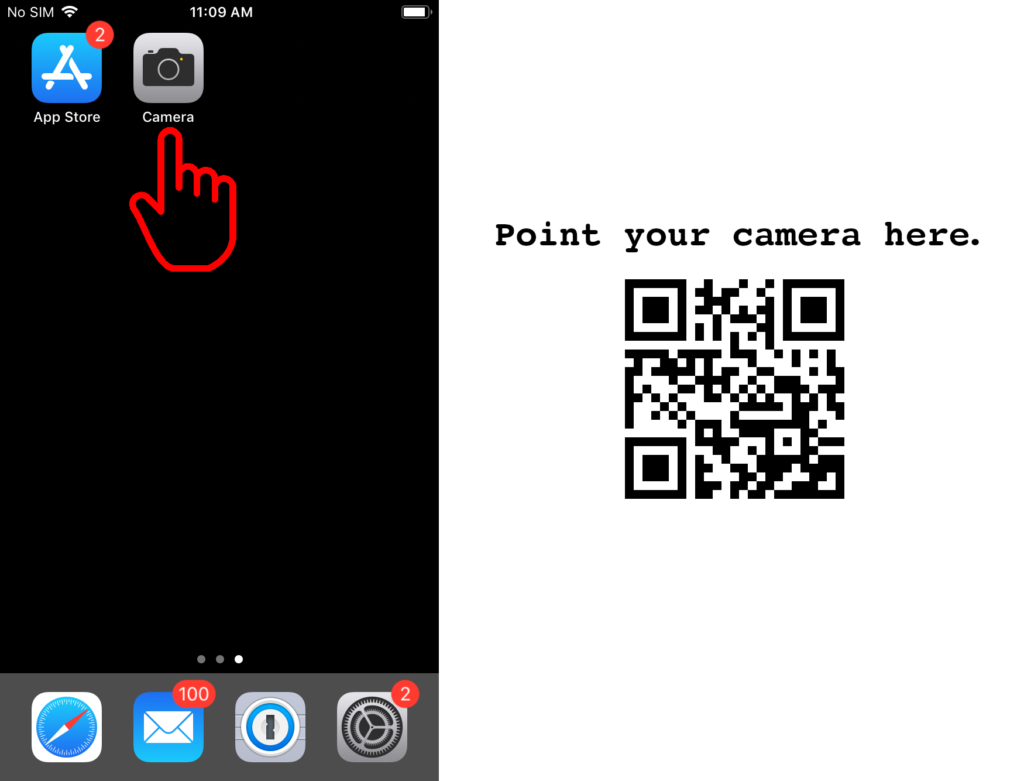 Camera app will resolve the QR code, and show a notification to open a website in Safari. Tap on the notification. 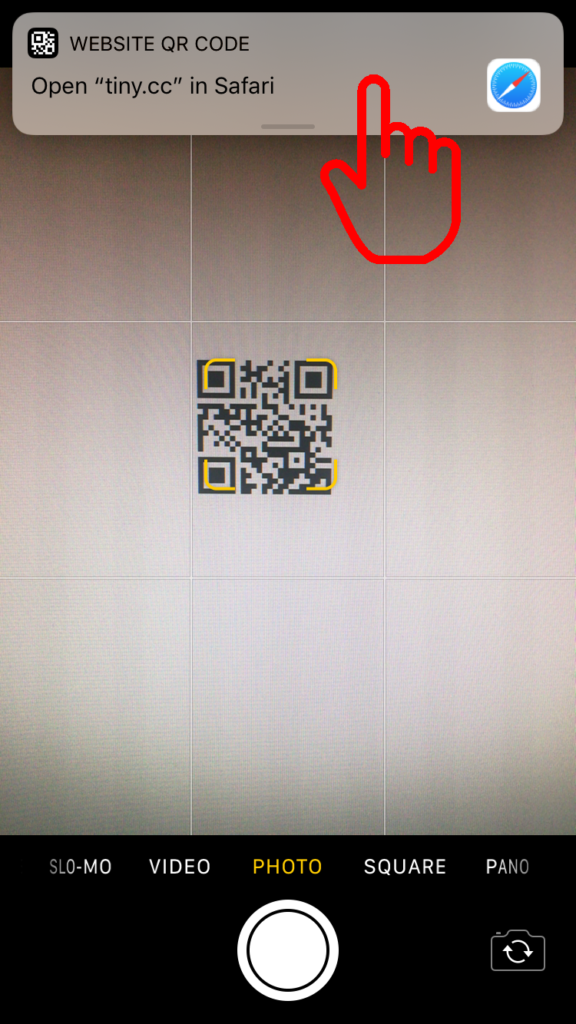 If camera app cannot read the QR code and display the notification, you will need to launch Safari and manually enter the address given below. 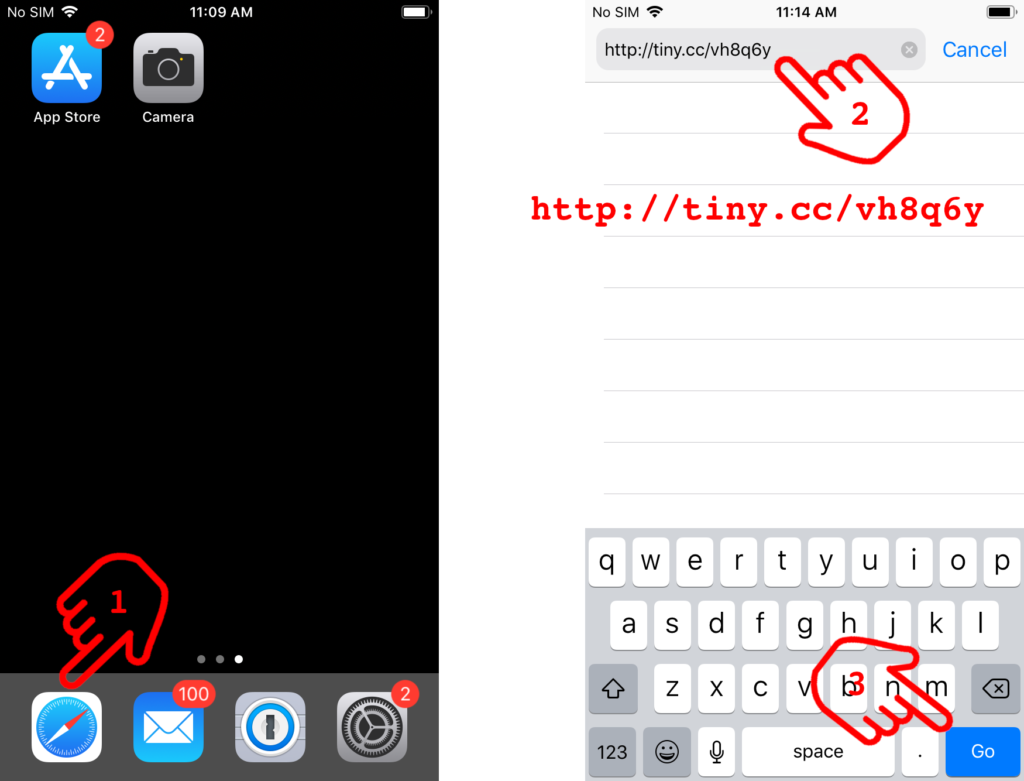 TestFlight is a tool developed by Apple that allows users to test an app before it gets released to general public. The Craving Experiment app will be tested through TestFlight. Once Safari loads the page, tap on the "View in App Store" button. 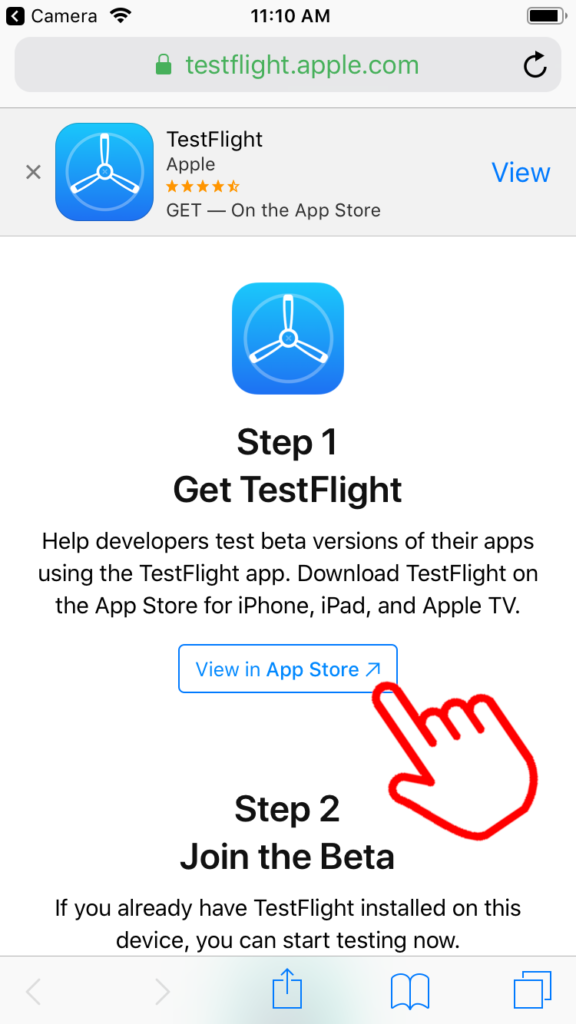 An alert box will ask you to open in App Store. Tap on the "Open" button. 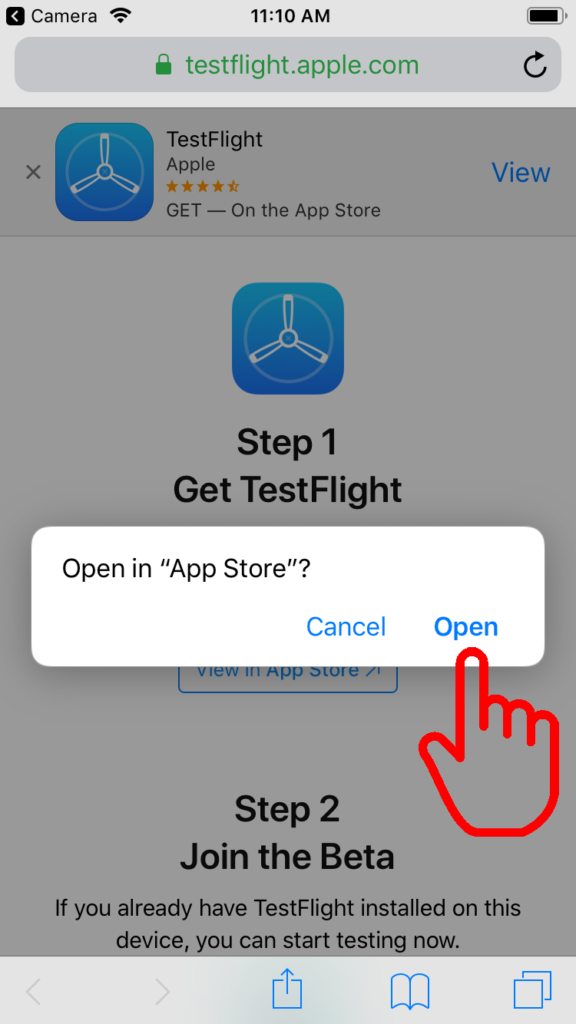 On TestFlight's App Store page, tap on the "Get" button. 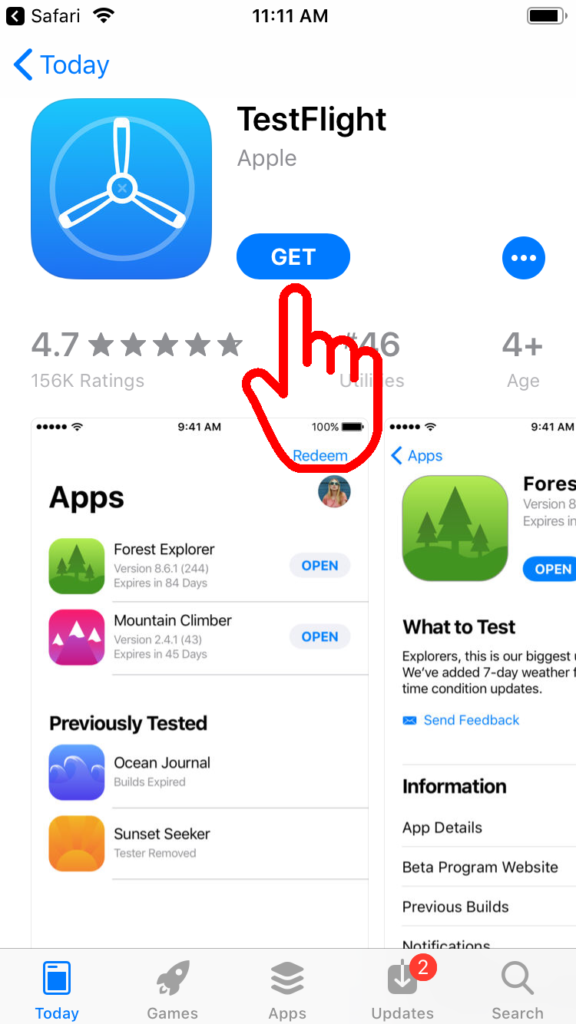 App Store will ask you to confirm your installation request. Tap on the "Install" button. 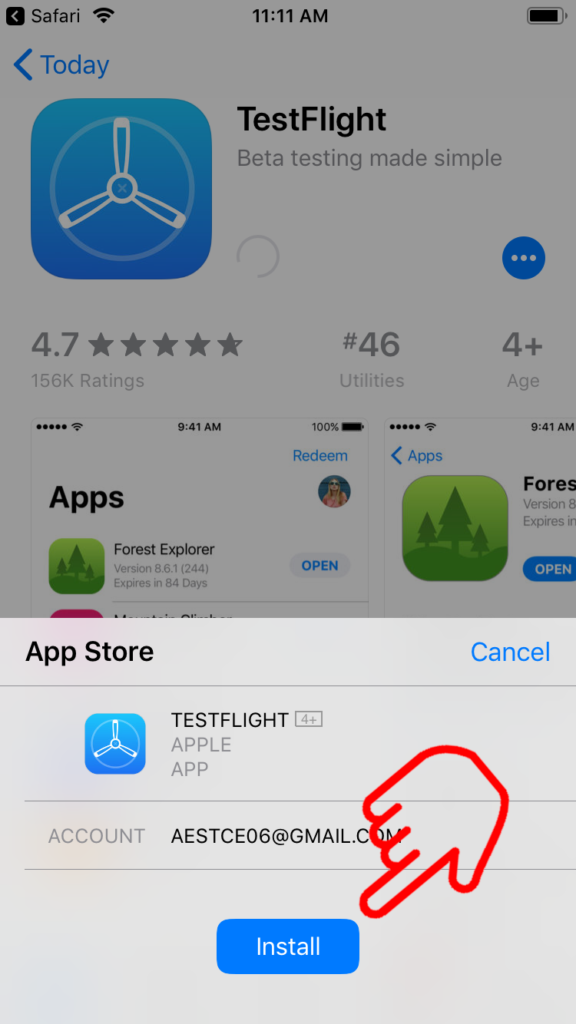 If you are asked to sign in, enter your Apple ID password (the password you used when you set up your phone). You may not need to enter a password if you are using an iPhone with Touch ID or Face ID. 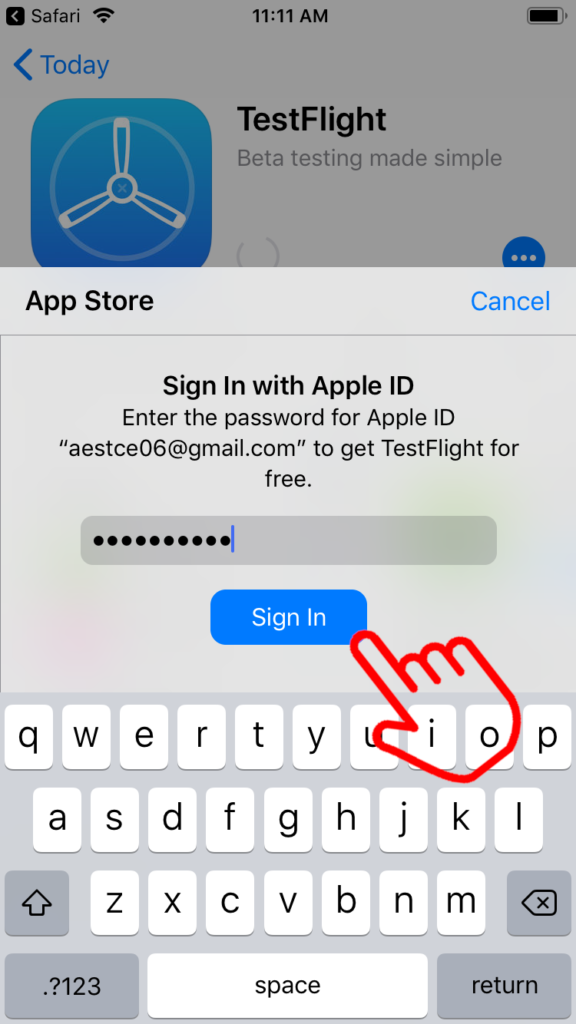 If you see the alert box below, you can safely ignore it. 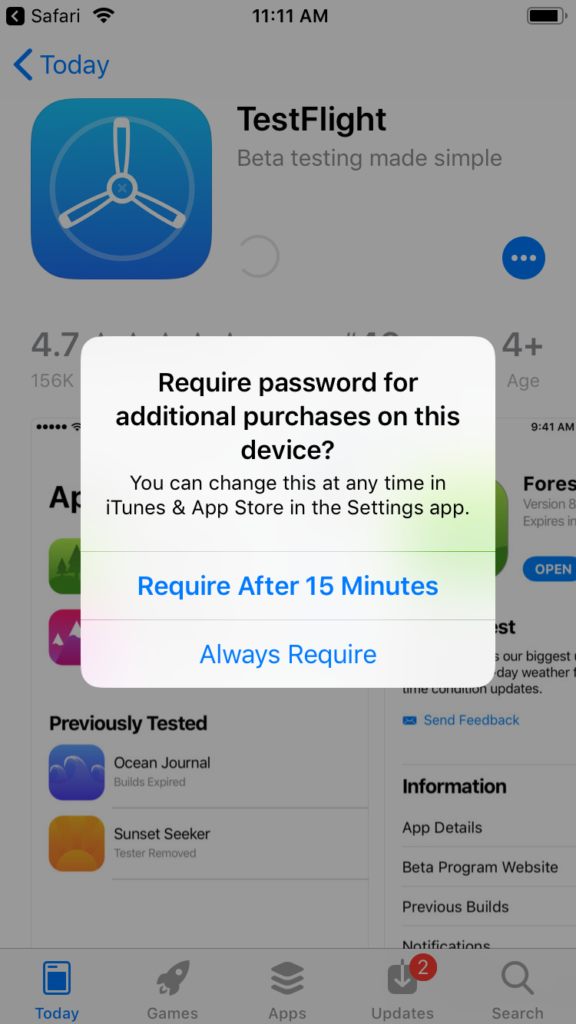 Once TestFlight is installed, tap on the "Open" button. 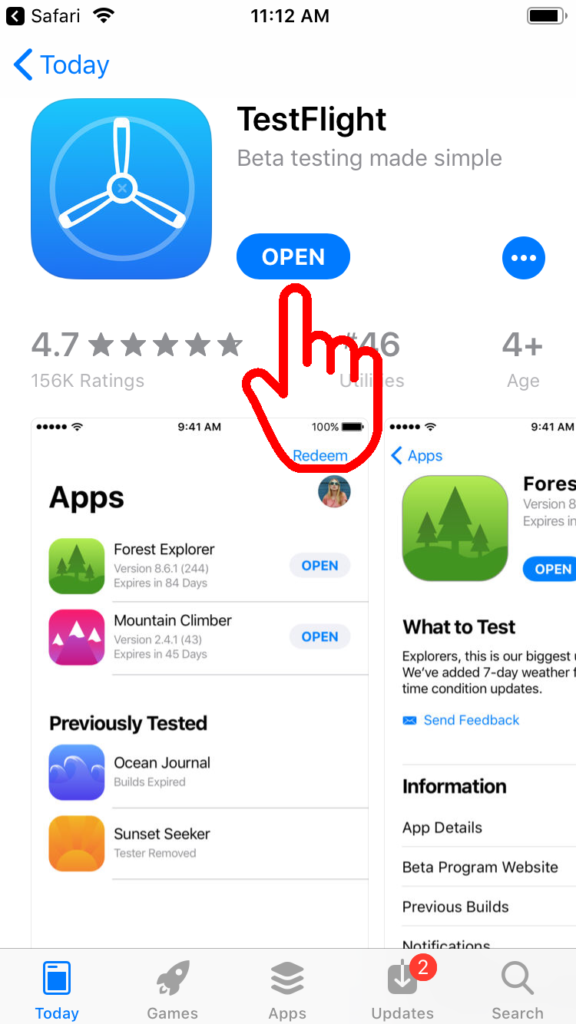 Tap on the "Continue" button in TestFlight. 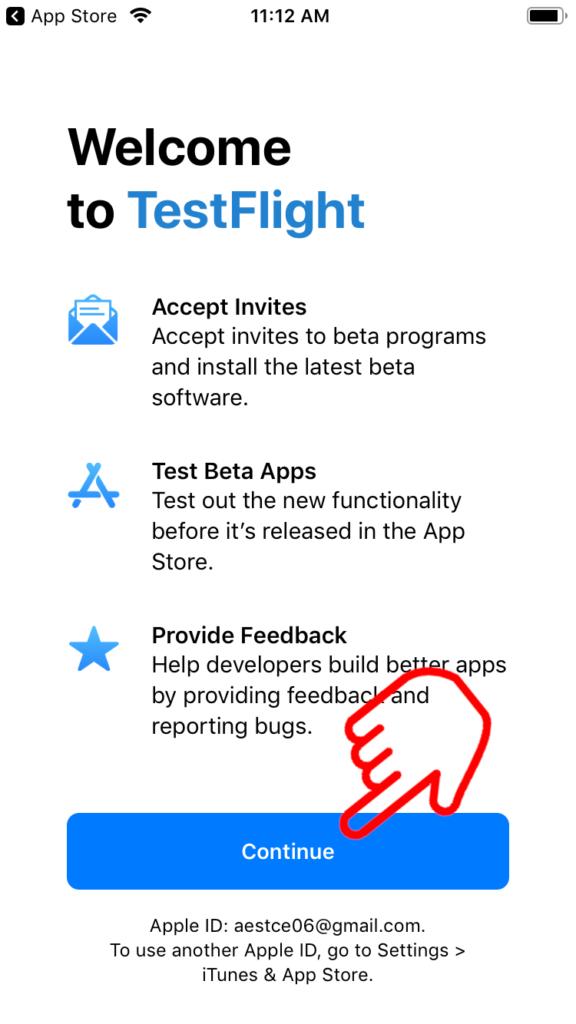 If you are shown terms and conditions, tap on the "Accept" button in the right bottom corner. 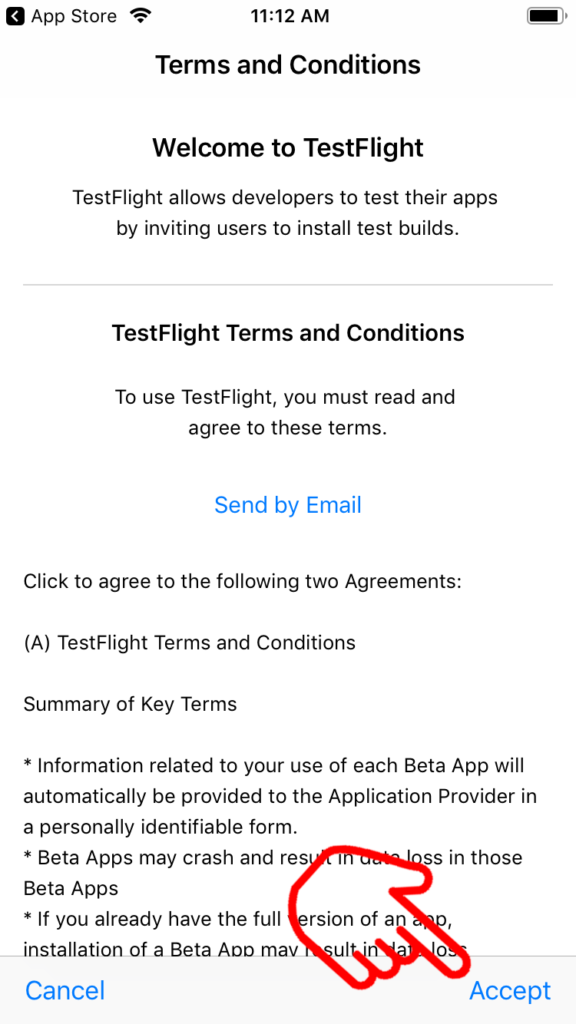 When TestFlight asks you for notification permissions, tap on the "Allow" button. This is important for you to be notified about recent updates to the Craving Experiment app. 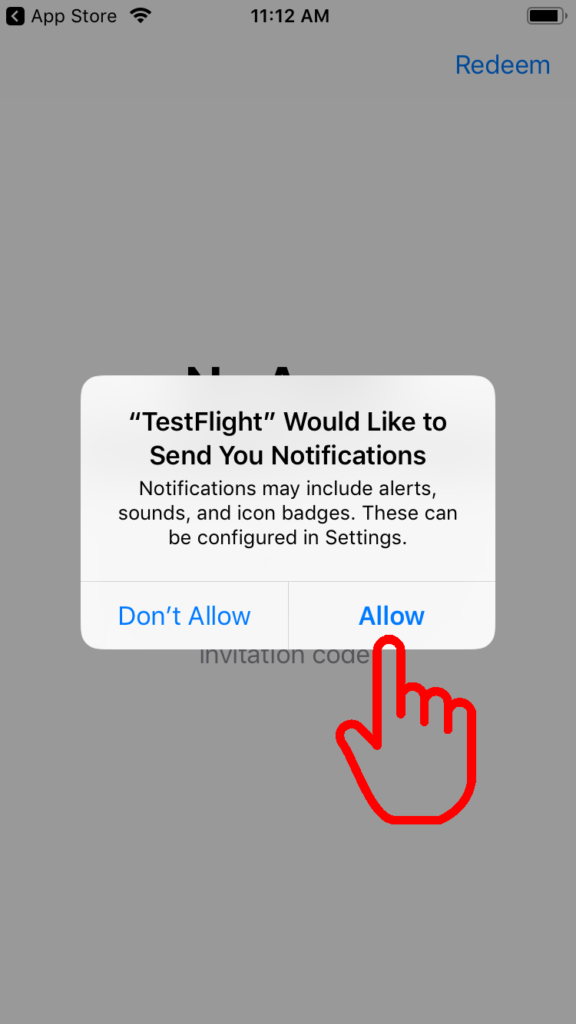 TestFlight is now ready. You can now go back to Safari. 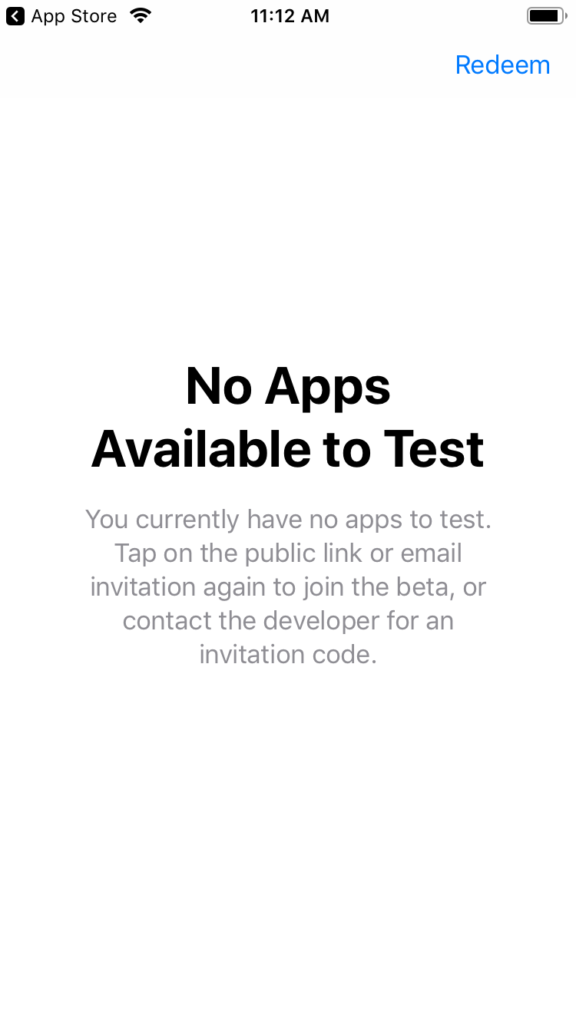 In Safari, scroll down to see "Step 2 Join the Beta" section. Tap on the "Start Testing" button, which is going to launch TestFlight. 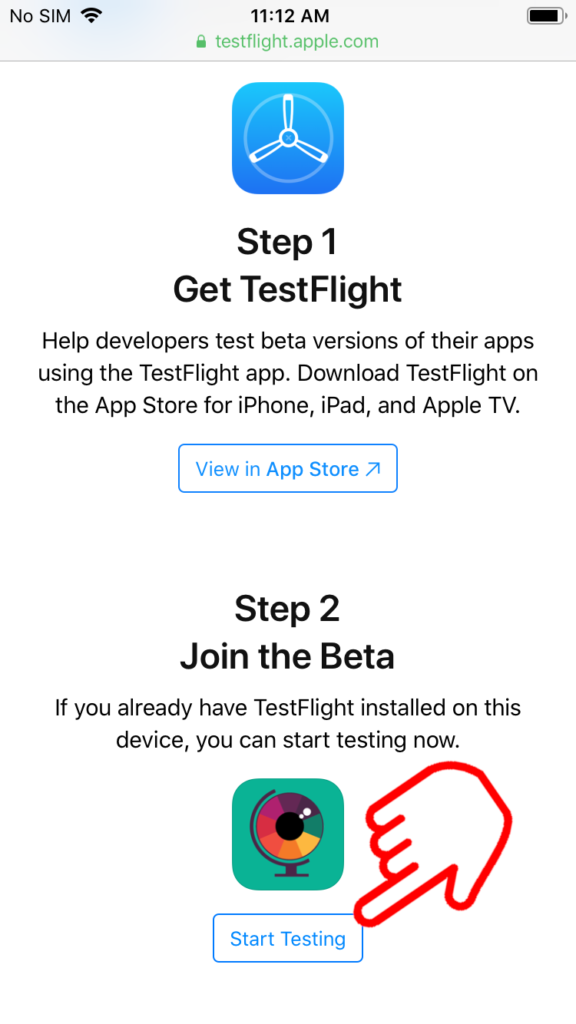 Tap on the "Install" button. 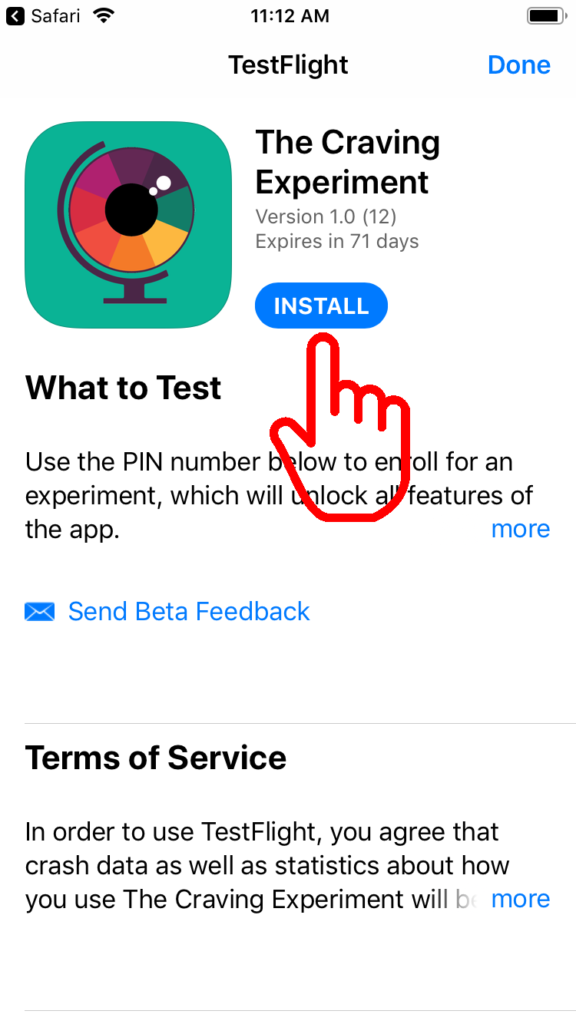 Once the app is installed, tap on the "Open" button. 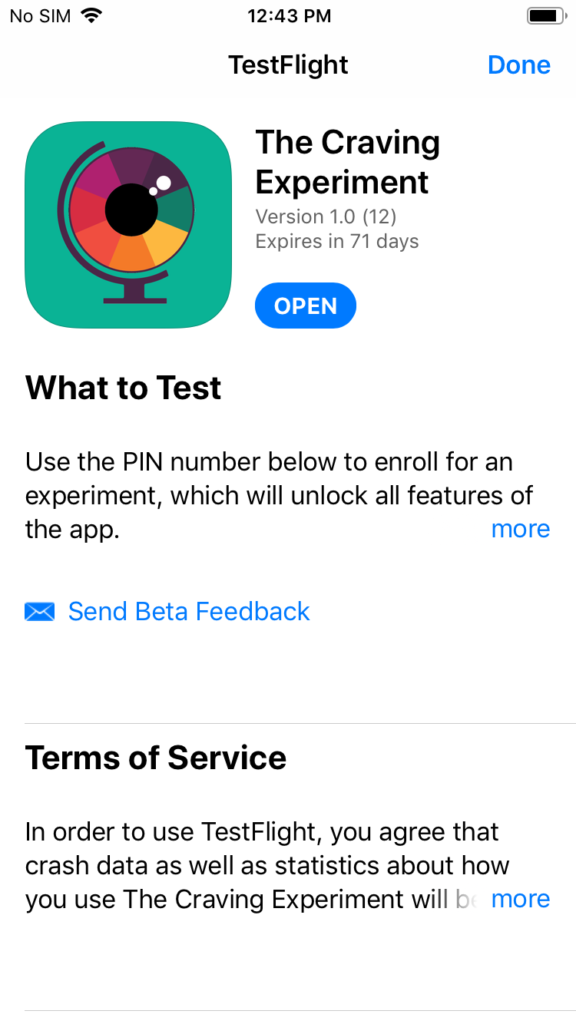 On the first launch, the Craving Experiment will ask for notification permissions. Tap on the "Allow" button, which will enable the app to send you reminder notifications about on-time and late submissions. 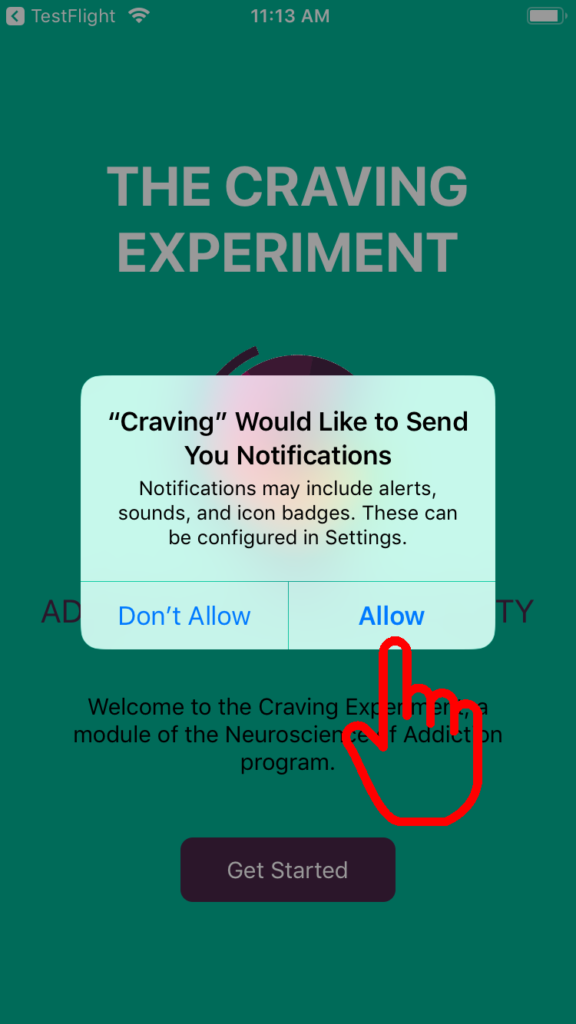 Tap on the "Get Started" button. 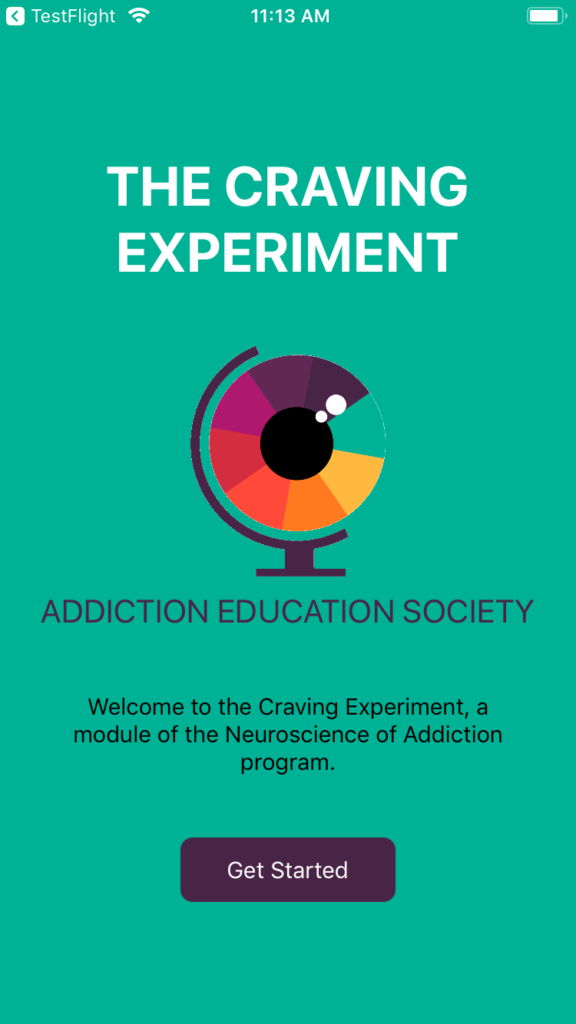 Enrolling for an Experiment

Fill in the form on the enrollment screen. Use the PIN number on the right. Note that the second to last character is a zero. 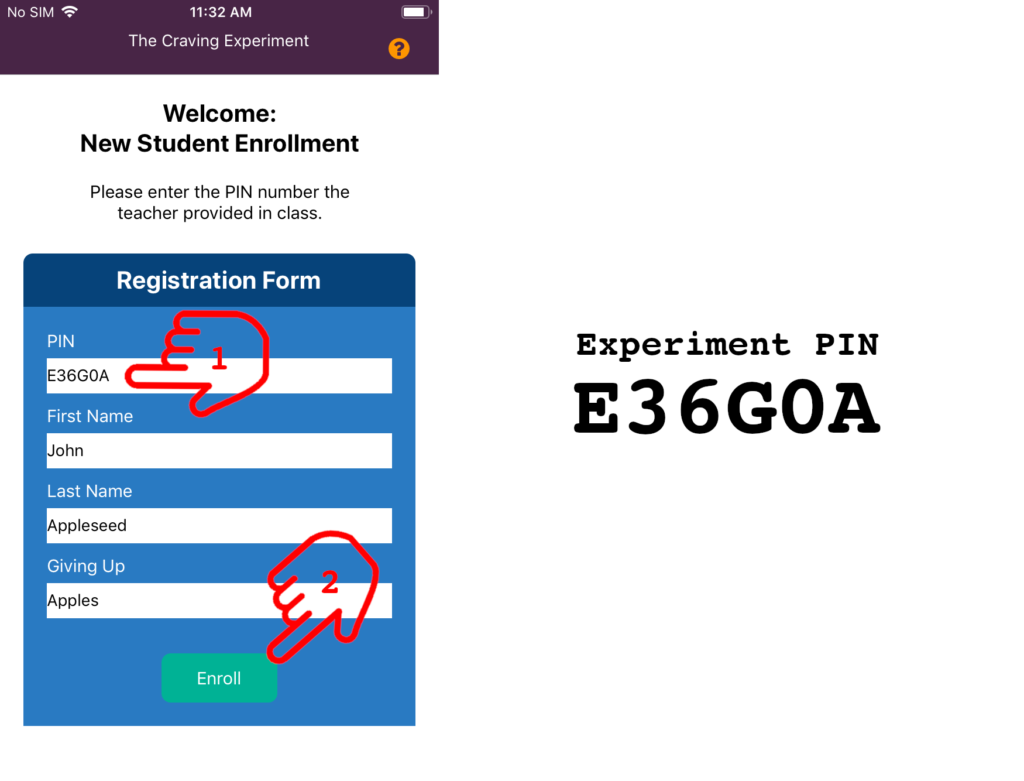 Enrolling for an Experiment

If the PIN number is typed correctly and the device is connected to the Internet, you will be taken to the main screen of the app. You are ready to test the app. 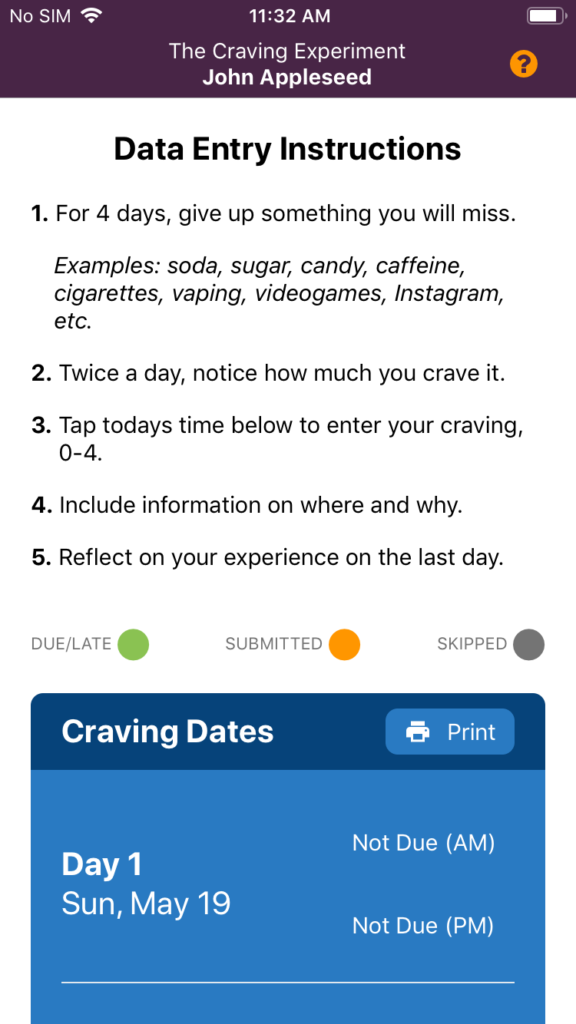 If you encounter any problems while using the app, or have suggestions for improvement, use the "Report Issue" button at the bottom of the home screen. Happy testing! 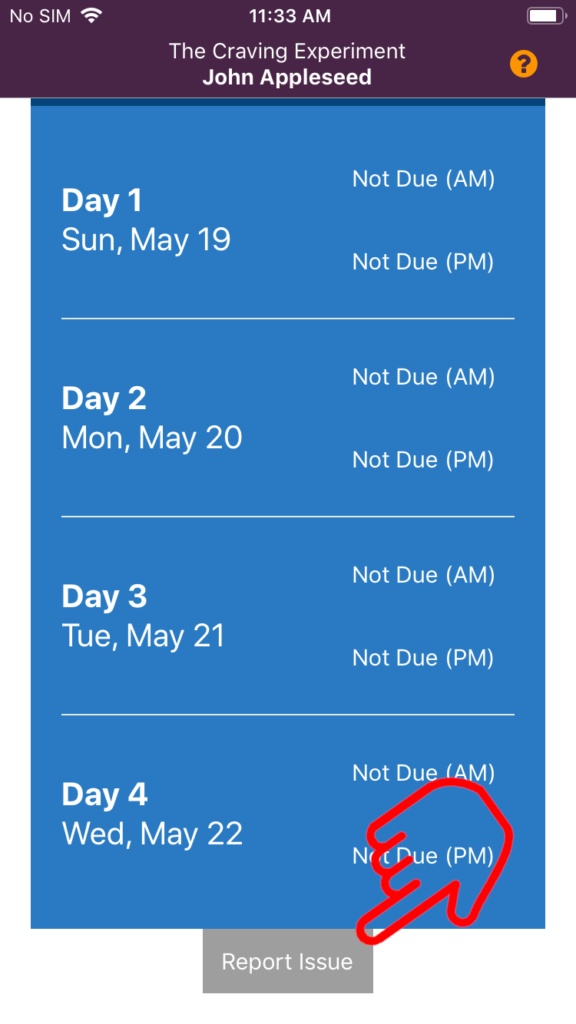 This tutorial explains how an iPhone or iPad owner can register as an internal tester for the Craving Experiment. Each step is supported with screenshots that you can follow.

Part 1 (steps 1 through 5) can be followed on any device (phone, tablet, or computer). These steps will allow you to join the 906 Technologies LLC team in the Apple Developer Program.

Part 2 (steps 6 through 7) and Part 3 (steps 8 through 13) can be followed on any iPhone or iPad that is currently being supported by Apple (see this link for the full list of supported devices). These steps will allow you to become an internal tester for the Craving Experiment app.

If you encounter any problems while following this tutorial, email Murat at murat@906labs.com to get help.

Check whether you have received an email from App Store Connect titled “You’re invited to join a development team.” If you do not see the email in your inbox, check your spam or junk folder.

After the main paragraph, you should see a link titled “Accept invitation.”

Tap on the link to launch App Store Connect where you are going to create a new tester account.

You should see a page with the title “Sign in to accept your invitation”.

Scroll down the page to enter your email address on the available text box (if it hasn’t been auto-completed already.)

Tap on the arrow on the right side of the text box. You will be asked for a password, which can be anything you want. Make sure to write down the password you enter here for future reference.

Once you type your password, tap on the arrow on the right side of the password text box. You are going to see a spinner while the next page gets loaded.

You should see a page titled “Review and agree.”

Scroll all the way down until you see a checkbox with a label that reads “By checking this box and clicking ‘Agree’, I confirm that I have read and agree to be bound by the Apple Developer Agreement.” followed by two buttons.

Tap on the checkbox, then tap on Agree button.

If you see a new page titled “Get started.”, then you have successfully joined the 906 Technologies LLC team.

Invitation for testing will be delivered with an email. Subject of the email will be “906 Technologies has invited you to test ‘The Craving Experiment'”, and the sender will be “TestFlight”.

Tap the Search button at the right bottom corner of the screen.

Tap on the search box on top of the Search screen and type “testflight” with no space. Tap on the blue Search button on the keyboard.

You will be taken to the search results screen.

Tap on the item titled “TestFlight” (It should have a subtitle saying “Beta testing made simple”, which is followed by a star rating.) You will be taken to TestFlight’s App Store page.

TestFlight is an app developed by Apple that allows testing other apps.

On top of the page, next to the big blue app icon you should see a small cloud button with an arrow pointing down. Tap on that cloud button to install TestFlight.

When the installation is completed, cloud button will be replaced with an “Open” button.

Note that you will be able to follow the steps below once you receive the invitation email mentioned in Step 5 (back in Part 1).

Go back to your phone’s home screen and launch your email app.

Tap on the invitation email sent by TestFlight with the subject “906 Technologies has invited you to test ‘The Craving Experiment'”.

Tap on the blue “View in TestFlight” button in the email. You will be taken to the TestFlight app.

When TestFlight app loads, it will show an alert box asking for notification permissions.

Tap on Allow button on this alert box. This will allow TestFlight to send you a notification whenever a new test version of the Craving Experiment app becomes available.

You will now be shown the Craving Experiment app’s testing page. Tap on Install button to download and install the app. When the app is installed, Install button will be replaced with Open button.

You may be shown an alert box with the title “Enjoying TestFlight?” Tap on “Not Now” button to dismiss it.

Tap on Open button to launch the Craving Experiment app and start testing.

The Craving Experiment app will ask for notification permissions on the first launch. Tap on Allow to receive reminder notifications about due/late experiments.

You can always get back to the Craving Experiment app from your home screen by tapping on the app’s icon (it will be labelled “AESMobile” or “AESMo…”, which will be updated when the app is released to public.)