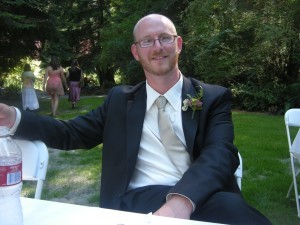 How did your addiction start?

I began drinking at an early age, taking my first drank around 7, and my drinking became regular by my early teenage years. I was a kid who never felt like I fit in anywhere, and I struggled with anxiety and feelings of loneliness. The taunts of kids in schools would grate on me day in and day out, but the moment I found alcohol, all of that changed. It gave me all the confidence I’d never had. It made the bad times tolerable, and the good times even better. But the thoughts of drinking and escaping never left my mind, and it became an obsession. I’d shoplift booze from the local convenience store, hide it from my family and drinking alone became my regular getaway. By 15, I found myself embarking on an initial journey into recovery. It last 5 1/2 years, but truthfully, I never got truly honest with myself, and was only riddled with jealousy that, for my remaining high school years and the first three years of college, other young people could drink and I couldn’t. So I swore I’d try a drink on my 21st birthday. I ended up drinking two days early, and that set off a decade long journey that eventually brought me to a point where I feared living more than dying. What had started as nightly ritual of a few beers turned into, by the end, straight maintenance drinking, waking up to several shots of whiskey in my coffee, drinking beer all day and ending with more hard alcohol and marijuana at night. All day, every day. I discovered gambling along the way which undoubtedly sped my decline, as I eventually began embezzling money from my employer in order to get what I needed – my fix.

What was the turning point for you?

I had lost it all – there was no money left of my own and barely any left to take. I couldn’t stop drinking, and I couldn’t get enough booze in me to kill the pain anymore. My life had become one big lie, as I’d been hiding the extent of my problems from everyone close to me. I spent four days lying, saying I had the flu, when in fact I was on a bender. I couldn’t stop. The terror was something I only wish nobody ever had to go through. On my final day, I had to confess to my then-wife that everything was gone, and I sat at the airport waiting for a flight east to my family. I just wanted to run away, and I had no idea what awaited me on the other end of it all. I never thought it was possible to reach that bottom…but alcoholism and compulsive gambling brought me down to my knees and finally, staring at all the wreckage, there were only two choices – let myself go for good, or ask for help.

What was your initial treatment?

At around five days sober, I checked into a 28 day inpatient treatment program at Lakeside Milam in Kirkland, Washington. That program saved my life. I needed to get away from the wreckage (I had confessed to an associate of my embezzlement, and on my third day of rehab, I read the front page news paper story saying that I was under investigation). Treatment forced me to see one thing crystal clear – my recovery had to be the most important thing in my life. They say whatever you put ahead of your recovery will be the second thing you lose. I learned that I had to get sober not for other people, or to look good in the face of my wreckage – that I had to get sober for myself. Most importantly, I had to learn that I was worth it.

Do you do anything differently, today?

I try to remain as vigilant in possible in the fellowship of recovery. Talking to other people who have faced similar things to me and hearing how they’ve moved through and handled the many challenges life presents sober is critical for me. I also do what I can for the newcomer. When I found recovery, I can’t even summarize how significant it was for me to talk to people, tell them what I’d done and then be told to, “keep coming back” and that “this too shall pass.” I owe that same warm heart to every new person who is seeking long term recovery. I try to remain physically active and in good shape, being mindful of my dietary choices, and to give myself the rest I need. In short, I try to avoid being hungry, angry, lonely and tired, as these four things can trigger an emotional spiral.

What is your life like, now, living in recovery?

With my career in the political arena at least temporarily done as a result of my actions, I went to work at a restaurant thanks to the kindness of an old and true friend who wanted to help me get back up on my feet. Going from a political player to bussing tables in a restaurant was humbling but so gratifying – both due to the physical exercise of the job as well as the warmth and kindness of the many new friends I made. I had long pondered how I might take my experience as a political organizer and merge it with my newfound passion for recovery. The brilliant documentary “The Anonymous People” was precisely the motivation I needed, and after reaching out to several key figures in the making of the film, I applied for and was then offered a position as an Organizer for UNITE to Face Addiction [aka FacingAddiction.org], a grassroots advocacy effort bringing individuals, communities and organizations together to stand up for recovery on the National Mall in Washington DC on October 4, 2015. This will be a landmark event in the history of the recovery advocacy movement in America, and I’m honored to play a part in it.

Do you have anything you’d like to share with someone currently struggling with a substance abuse problem or an addiction?

You’re worth it, plain and simple. There is a solution to your problem, and millions of people out there – 23 million in America, in fact – have found it. You can too.

What is the best part about your recovery?

Today my life is honest and true. I don’t have nearly the material things I once did – but what I have today is a reflection in the mirror that I can look at and feel good about it. The greatest job of recovery is the ability I now have to feel good about the things I do, and the person that I am. I had never felt that before in my life. I get to spend time with my children and be emotionally invested. I get to care for others and be a good friend and a good son. And it’s all genuine and true. I owe all of that to recovery.